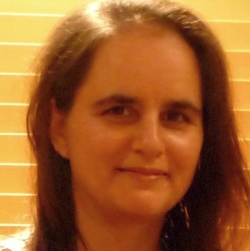 Ann Lynnworth is on the HREF Board of Directors and has operational and fiscal responsibility for the company.

Ann co-founded HREF Tools Corp. in 1995, worked for the company until March 2000, and then started again in February 2001. Ann Lynnworth has been President of HREF since August 2001.

Ann has an AA degree from Simon's Rock College; a BA from Wellesley College, and has been working in high-tech firms since 1978.

Ann has experience as a programmer in Delphi and C, database work in Interbase, Firebird, Oracle and Paradox; and in running small businesses and non-profit projects.

Ann's native language is English and she reads and speaks German. She has forgotten almost all the French and Latin she studied in high school; she has more than a passing interest in Esperanto.

Current: Woman of Many Hats

HREF's flagship product, WebHub, was one of the first serious web development tools on the market. Thanks to tremendous loyalty from our customers, we have stayed in the game while almost all the other early players bowed out.

Quote of the Moment

"Woe to the nation (state) in which power is better organized than justice!"
--Marie Blenk, nee Falkenthal (Ann's grandmother).